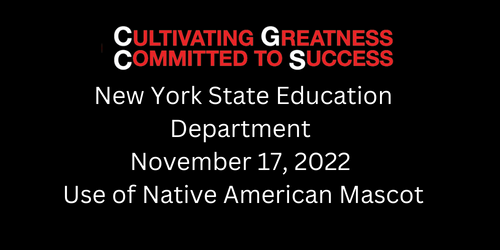 To: All School Districts

The State Education Department (SED) wishes to ensure school districts’ knowledge of a recent legal decision and their concomitant need to ensure that district mascots, team names, and logos are non-discriminatory.
SED has consistently opposed the use of Native American mascots. In 2001, former Commissioner of Education Richard P. Mills issued a memorandum “conclud[ing] that the use of Native American symbols or depictions as mascots can become a barrier to building a safe and nurturing school community and improving academic achievement for all students.” Commissioner Mills recognized that, while a role for local discretion existed, “there is a state interest in providing a safe and supportive learning environment for every child.” He asked boards of education “to end the use of Native American mascots as soon as practical.”
Many school districts have heeded Commissioner Mills’ directive and retired their mascots. Most recently, the Waterloo and Lyme Central School Districts retired their mascots. SED commends the efforts of these districts.
Other school districts have not complied. Among them, until recently, was the Cambridge Central School District. After extensive study in 2020 and 2021, Cambridge voted to retire its “Indians” team name, logo, and mascot in June 2021. It hastily reversed itself in July 2021 upon the election of a new board member. Community members challenged this action in an appeal to the Commissioner of Education under Education Law § 310.
In Appeal of McMillan, et al.,1 the Commissioner held that: (1) Cambridge “offered no meaningful explanation as to why [it] no longer found the information it had previously cited persuasive”; and (2) Cambridge’s retention of the “Indians” logo “inhibit[ed] the creation of a safe and supportive environment for all students.” On the latter point, the Commissioner noted that:

• A 2020 literature review on studies of Native American mascots by Laurel R. Davis-Delano, et al. concluded that each study reviewed “demonstrate[d] either direct negative effects on Native Americans or that these mascots activate[d], reflect[ed], and/or reinforce[d] stereotyping and prejudice among non-Native persons.”
• The New York Association of School Psychologists (NYASP) concluded that “research studies have consistently shown that the use of mascots and Indigenous symbols and imagery have a negative impact on not only Indigenous [students], but all students …”
• The Dignity for All Students Act prohibits “the creation of a hostile environment ... that ... reasonably causes or would reasonably be expected to cause ... emotional harm to a student,” a condition that could be created through the use of Native American mascots.
• The Board of Regents (BOR) has taken affirmative measures, consistent with the Dignity Act, to promote positive learning environments in schools, including its Culturally Responsive-Sustaining Education Framework and policy on Diversity, Equity, and Inclusion.

Thus, the court’s decision establishes that public school districts are prohibited from utilizing Native American mascots. Arguments that community members support the use of such imagery or that it is “respectful” to Native Americans are no longer tenable.
Those school districts that continue to utilize Native American team names, logos, and/or imagery without current approval from a recognized tribe must immediately come into compliance. Should they require guidance, districts may reach out to those districts that successfully retired their mascots or their local Board of Cooperative Education Services. The Department is developing regulations that will clarify school districts’ obligations in this respect.

Should a district fail to affirmatively commit to replacing its Native American team name, logo, and/or imagery by the end of the 2022-23 school year, it may be in willful violation of the Dignity Act. The penalties for such a violation include the removal of school officers and the withholding of State Aid.2

Schools are learning environments; students learn as much through observation of their surroundings as they do from direct instruction. In addition to their legal obligations, boards of education that continue to utilize Native American mascots must reflect upon the message their choices convey to students, parents, and their communities.